Purpose
Requirements
About the author
Features 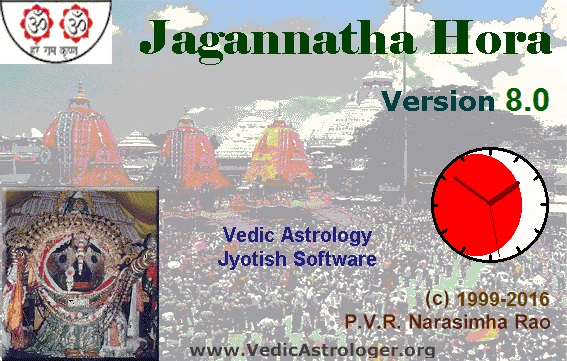 But people are using it on MacOS and linux using windows simulators. If interested, read some information on it.

This software was designed and written by P.V.R. Narasimha Rao. He is a software engineer and astrologer hailing from India and living near Boston, US. He has engineering degrees from IIT, Madras/Chennai and Rice University, Houston. He is also a Sanskrit scholar. He authored a textbook, many magazine articles and research articles and teaches astrology near Boston. You can read more about him here. 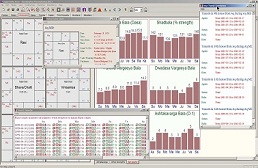 In terms of the range of calculations available, technical depth and breadth, level of customizability of calculations and ease of use, Jagannatha Hora is unsurpassed by any contemporary Vedic astrology software package. If interested, please check out a nearly complete list of the features.

To download any of the following zip files, click the right mouse on the "Download" link and select "Save target as" in the pop-up menu. The corresponding zip file will be saved on your computer in the directory you choose. Go to that directory in a windows explorer. Locate the zip file and unzip it. You will get a file with the same name, with .zip in the file name replaced by .exe. Run the executable by double-clicking on it. The corresponding installation should start in a few seconds. Read the instructions and follow them. The first screen may give a security warning about an unknown publisher. If you give permission to the installer executable to run by clicking "Run", the installation will proceed.

Read the following carefully and choose the version to download.

Note: The zip files do not have any problem with them. Many people have successfully downloaded and installed the software. If you are unable to unzip them after downloading them or unable to install, it means that your download did not succeed for some reason. Keep trying until you succeed. We cannot help you with this and there is no use in sending us an email.

We do not distribute or sell the software in CDs. You have to download the software from the internet. You may also try to find someone who has already downloaded it and get them to make a CD for you.

Thank you for using this software. Please use it to help people and to conduct researches to enrich our collective understanding of Vedic astrology. It is the author's earnest and sincere hope that your use of this software will result in a lot of souls being helped and also in a renaissance in the knowledge of Vedic astrology!

Thank you for visiting this page and downloading this software.